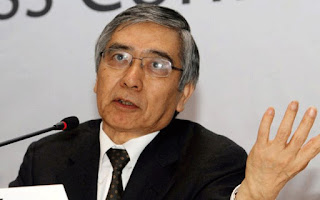 As financial panic spreads around the globe, so does the central banking tyrants' attempts at keeping the house of cards on stable ground.

On January 21st, Bank of Japan Governor Haruhiko Kuroda stated that NIRP (Negative Interest-Rate Policy) was not in the cards for Japan.

Then on January 28th, after having met with the world's most preeminent parasites in Davos, Switzerland, Mr. Kuroda had a schizophrenic moment and announced that NIRP shall indeed descend upon Japan, reigning down fiery death and destruction on savers all over the island nation.

If all this stuff didn't affect ordinary people in an adverse way, it might almost be humorous.  Who do these people think they're fooling?

When one examines the language of central bankers such as Kuroda today, one finds striking parallels to the bankerspeak of Fed Chairmen Ben Bernanke in the lead up to the 2008 subprime mortgage crisis.  Another parallel involves associated actions and statements of said banksters being framed by media as "blunders", or "mistaken errors of judgement", or "policy errors" rather than what they really are: rhetorical tactics, i.e. lies.  Many others have noted these similarities as well.

Keeping that in mind, just look at what Kuroda said to Bloomberg while he was in Davos, Switzerland meeting with the world's foremost economists and central bankers:


" With China dominating the focus of global financial markets, Kuroda offered what he said was a "relatively optimistic" view about Japan’s larger neighbor.

China doesn’t face the risk of a hard landing and there is no sort of global crisis like the post-Lehman Brothers meltdown, according to Kuroda. "

Phew. I feel safer now.  This guy says everything is awesome.  He wears a suit, so he must know a thing or two.  I'm sure he won't do something crazy like enact NIRP in a last-ditch effort to keep markets from falling further....oh wait, global stocks soared today, just as they did during the 2008 crisis.  Imagine that.  And just in time for the final trading day of January, making the worst starting month to a year in history appear....somewhat less historic.
Posted by Brian Dean Nibley at 4:04 PM