JPMorgan to the rescue! 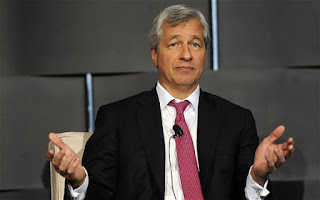 Get a load of the following headline: http://www.cnbc.com/2016/03/11/jpmorgan-places-a-big-bet-on-jobless-youth.html

So one of the too big to fail banks that crashed the economy in 2008 and got bailed out has now come to the rescue again.

This time, with a bunch of sound-good "job creation programs". The following comes from CNBC:


Last month, the Wall Street mega-bank committed $75 million to tackle youth unemployment, which in parts of Europe, the Middle East and Africa is well above 20 percent, and is frequently mentioned as being responsible for a range of social ills in those regions. In the U.S., the youth unemployment rate runs at 10 percent, about double the national jobless rate and totaling more than 5 million.
For the U.S. economy, the stakes are high: A 2014 paper by the Brookings Institution estimated that unemployment among the 16-24 age group will account for $20 billion in lost earnings over the coming decade.
Longer term, the collective social burden of youth unemployment will cost the economy a mind-boggling $4.75 trillion, estimates from the Corporation for National and Community Service say. Put in context, that is nearly one-third of the nominal value of the U.S. economy as a whole.
Enter JPMorgan, which is plowing millions into its New Skills for Youth Initiative, an effort that will invest in a range of job education programs and skill training.
Question: Who will be creating the jobs?  This all-important details remains often overlooked by politicians, bankers, and bureaucrats who claim to somehow be aiding "the social good".
No words can be found to describe the utter hypocrisy of an institution such as JPMorgan reaching out "a helping hand" to aid all those indebted students.
For those who may have forgotten, allow me to refresh your memory.  In 2013, JPMorgan was fined billions for its role in the 2008-2009 financial crisis (the one that never really ended).
Many other banks were "held responsible" as well.  Of course, paying these fines amounts to a slap on the wrists for banks with assets under management in the trillions.
Iceland threw its bankers in jail, and their economy has recovered marvelously.  Other nation-states ought to follow suit.
Beware those who produce nothing of value for society coming to the rescue.  Their intentions tend not to lean toward the compassionate, despite their endless claims to the contrary.
Posted by Brian Dean Nibley at 10:32 AM