Death of the Dollar Now Guaranteed as China Launches Petro-Yuan 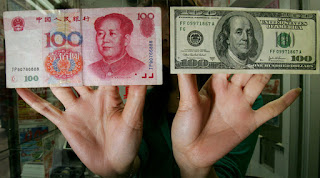 China has officially announced that its new currency, the petro-yuan, has gone live. This will lead to the US dollar losing reserve currency status and ultimately failing as a currency. The resulting chaos will have only one solution – war. The death of the dollar will not be televised.

Death of the Dollar Many Decades in the Making

This Time the Death of the Dollar Will be Different

When China, Russia, and others take similar action, what will happen? Surely such economic and military powerhouses cannot be invaded and overthrown. No, the result will have to be much more dramatic. The result will be a world war that could, perhaps, become a full-scale nuclear assault.

I have been writing about this over and over because I both want people to take notice and want to have it on the record so that when it hits the fan, it can be understood what the real causes were. Make no mistake – the mechanisms underlying this imminent financial failure will be obscured. For evidence of this, just look to the lack of press coverage this Petro-Yuan event has received in the Western mainstream media.


The Death of the Dollar Receives Little Media Coverage

Were it not for RT.com, I myself would never have even known this happened. American and European media have us distracted with endless scandal and presidential affairs with adult actresses. Meanwhile, the entire empire has had its support pillars undermined and the final nail placed in its coffin. Most people living in first-world nations haven’t the slightest clue that any of this is happening.
This will allow those in power to pin the failure on any manufactured event they so choose.
Most likely, the excuse will involve a false flag attack involving chemical, biological, or nuclear weapons on American or European soil that will be blamed on a “hostile” nation such as China, Russia, Syria, Iran, or North Korea. It’s hard to imagine any nation other than these five being the alleged culprits. Remember, if you hear of an attack being caused by one of these nations, rest assured it was a false flag intended to bring the world to war for the third and final time in just over a century.
Posted by Brian Dean Nibley at 7:48 PM