Negative Interest Rates are Coming: Are You Ready? 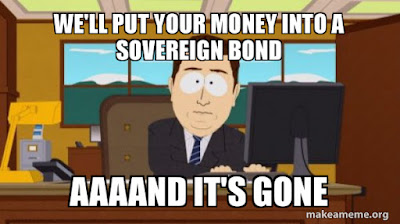 Chances are, you’re not ready for what’s happening or what’s coming. The full realization of what it means to have negative-yielding debt going parabolic has yet to hit the average investor.

The smart money has been on the move for some time, though. We can see this in the skyrocketing gold price against most fiat currencies around the globe (gold has hit all-time highs in at least 72 different currencies so far in 2019). It’s also apparent in the cryptocurrency market growing from seven billion USD three years ago to now being valued at several hundred billion.

In addition, there's a growing correlation between the amount of negative-yielding debt outstanding, the price of gold, and the price of bitcoin. All have been going up in lockstep.

The Connection Between Debt, Gold, and Bitcoin

If you look at trendlines for the support levels of negative-yielding debt and gold over the last six months, the angle is quite similar. The same thing goes for the resistance trendline for BTC/USD.

Given that bitcoin still has a large base of speculators in its market, it makes sense to follow the resistance rather than support. Big profit taking tends to happen on any price increase to a degree not present in the gold market.

Bitcoin also has the added variable of new miners coming online, who tend to take profits in fiat to cover their operating costs. The bitcoin hash rate hit a new all-time high in July. This is supportive of prices in the long-term but maybe not in the near-term.

Now, here's the trend of increasing amounts of negative-yielding bonds: 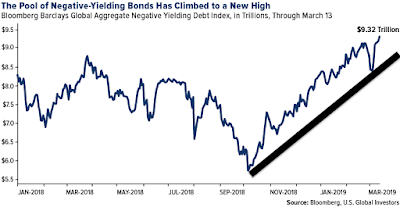 The trend for the price of gold as measured in dollars:

And the trend for the price of bitcoin as measured in dollars: 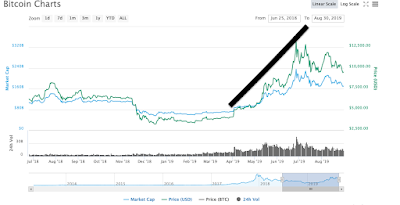 As you can see, the rate of increase is almost identical for all three.


The timeframes are slightly different – the trend with negative-yielding debt is almost a perfect 45-degree slope upwards since September 2018. Gold and bitcoin have only seen such steep rises since around April or May, however.

So, there has been at least a seven-month lag between the time interest rates go deeper into negative territory and the time at which investors flock to safety. This makes sense when you consider that it takes time to realize what’s going on, liquidate assets, and move capital. But now that the process has begun, things will accelerate much faster going forward.

Investors who have suddenly realized they are at risk of having their money stolen from them are seeking refuge in safe-haven assets. Gold is the go-to safe-haven asset. It always has been and always will be. And while bitcoin’s status as a safe haven may still be debatable to a degree, the price action of gold and bitcoin have been increasingly correlated as of late.

My argument is that it doesn’t matter what you believe about bitcoin, its economics, or even the blockchain technology that powers it. Investors have begun perceiving BTC as a safe haven, and that perception becomes a self-fulfilling prophecy. 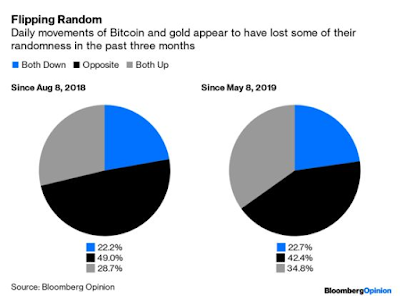 Keep in mind that the negative-yielding debt chart from Bloomberg (the first chart shown in this article) only goes up until March of this year, at which time the total figure was under $10 Trillion.

Since then, the trend has been going parabolic (vertical even), with the total now reaching beyond $16 trillion (this number is hard to keep up with. By the time you read this, the figure could easily be one or two trillion higher).

It’s hard to make connections between negative interest rates and anything happening in the economy because this has never happened before. Negative rates are without precedent. The fact that the correlation between rates/gold/bitcoin is so striking says a lot about what’s happening and what’s coming.

You’ve probably been hearing about a historic crash coming for a long time now (especially if you read Zerohedge). And you’ve certainly been hearing rumors of a possible recession from every financial news media pundit and their mother over the course of the last six months.

Here’s what you haven’t heard: they’re all wrong. The crisis isn’t far away in the future. It’s here and now. While it may be some time before things get so bad they can no longer be hidden and most media outlets admit this, the data doesn’t lie.

What data am I talking about? Well, the charts I just showed you, for starters. Those indicate that sovereign bonds, once the ultimate safe-haven asset, are now becoming much worse than just a risk asset - they're becoming a guaranteed loss. As such, money has begun flowing out of fixed-income assets and into fixed-supply assets, i.e. gold and bitcoin, which have a finite and a fixed supply, respectively.

But the final nail in the coffin for the global economy in terms of data illustrating its demise is M2 velocity of money. The velocity of money is sometimes referred to as the pulse of an economy. And the patient is dying.

M2 money velocity is a measure of the rate at which currency changes hands throughout the economy. As you can see, money in America has been moving slower and slower for decades. As the Fed ended its zero-interest-rate-policy (ZIRP), M2 money velocity stopped tanking and has begun to flatline instead. Progress!

Some might say this is a myopic view and that only looking at a single metric doesn’t give a clear picture of economic activity. I would argue that it does because this one metric invalidates so much of the “everything is great” narrative we have been bombarded with for the greater part of the last decade.

If unemployment is low and main street is doing just fine, why has money velocity been trending lower for decades?


This Wasn’t Supposed to Happen

Quantitative Easing and lower rates were supposed to be a temporary, one-time thing. They were intended to prevent worldwide economic collapse. Instead, these policies ensured that the real economy that died in 2008 would appear healthy until more debt and currency printing couldn’t cover the rotten corpse any longer.

Stocks in the US are high because of corporate buybacks fueled by corporate debt borrowed at zero interest. Unemployment is low because people have dropped out of the labor force. Banks have remained solvent because the Fed printed trillions of currency units and gave it to them for free (at zero interest) to keep their balance sheets propped up.

Negative-yielding debt going vertical isn't so much a canary in the coal mine or a black swan as much as it is a mass die-off. After years and years of monetary stimulus, the diminishing returns it provides are no longer working. In fact, the returns are becoming negative.

Investors have begun to understand this and are acting accordingly. The entire monetary paradigm is shifting.

What do you have to say about this?

Do you think negative interest rates have begun altering the financial system in a fundamental way? Or will none of this change anything?

[Update on 9/5/19 – Former Fed Chairman Alan Greenspan says "it's only a matter of time" before negative rates come to America.]